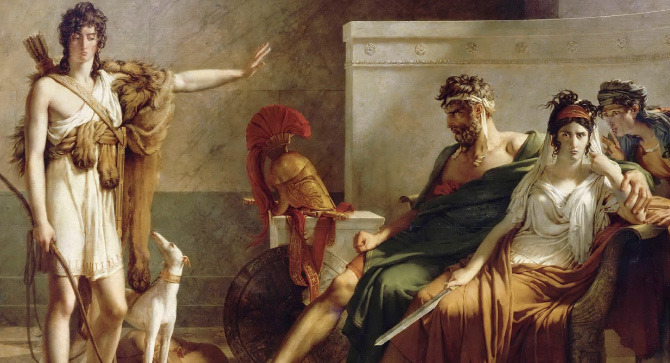 Euripides writes about the myth of Hippolytus on two occasions. The first work, Hippolytus Veiled, scandalizes the Athenian spectators with a very sensual and sexual proposal, in which Phaedra does not hide her desire for Hippolytus, her stepson, and the latter covers his face with a veil embarrassed by his stepmother’s words. Later, encouraged by the success of his contemporary Sophocles’ Phaedra, he rewrites Hippolytus, a much craftier proposal more in line with the taste of the times.

Hippolytus is a contemporary classic, extremely interesting to us nowadays. The confrontation between the love Phaedra feels for Hippolytus will lead her to suicide driven by Hippolytus’ intolerance and what will people say. The defeat of a woman embarrassed for loving, as opposed to the intolerance of a man who says “I wish all you women would die”, clearly expresses the man-woman struggle, in which the woman is always at a disadvantage. Common sense is provided by the nurse, a woman representing unconditional love, and who could not be further away from those goddesses whose sons and daughters’ happiness matters much less than the dispute they hold between one another to prove which of the two is more powerful.

In our proposal tragedy falls on Phaedra. She cannot resist loving Hippolytus. She assumes her tragic mistake and commits suicide. Taking a look at the titles of the dramas by Aeschylus, Sophocles, and Euripides, we will come to the conclusion they are all either collective (Persian, Trojan…), or individual (Oedipus, Medea…) heroes/heroines. The version written by Isidro Timón and I was inspired by the two compositions by Euripides, the failed and the successful versions, bearing in mind Sophocles’ Phaedra and rationalizing the passionate, emotional and sexual relationship between a man and a woman who, beyond their social relationship, stepmother-stepson, were two young people of similar ages. Always from the immense respect inspired by an author who has been able to withstand the test of time so well.