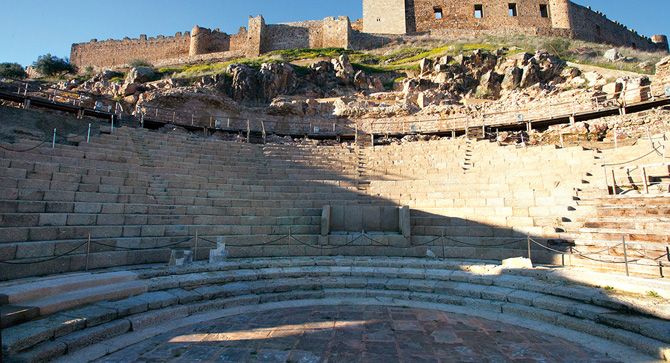 The Festival of Mérida in Medellín

The Mérida International Classical Theatre Festival is taking its vocation to universalizing the Festival to Medellín and its Greco-Latin theatre. The rehabilitated Roman Theatre of Medellín is hosting a part of the Festival of Mérida for the sixth consecutive summer as a way to reinstate the monument’s original theatrical purpose.

In addition to these plays, the passacaglia Prometeo El Grande (Prometheus the Great) will be performed by the company Santuka de Fuego on 19th July at 9 p.m.

La loca, loca historia de Ben-Hur is full of ingenuous visual gags, sarcastic and absurd dialogues and an interesting reflection of the truth, love and the gender battle. Four actors and two actresses in a state of grace bring a number of characters to life to once again tell what nobody dared tell about Ben-Hur and, this time, uninhibited. Because, in this story, things aren’t what they seem. Better said, in this story, things are what they seem…

Aeschylus – The Birth and Death of Tragedy

Many years ago, I read the definition of Classical Art offered by a great Hellenist scholar whose name I no longer recall: “Classical work (he said) is when there’s nothing remaining of the effort involved in the creative process”. So, I thought, only a sunset, an eagle’s majestic flight in a limitless sky or the dancing of the stars in the universe can be classical. In short, something that’s always inaccessible to mortal artists.

This show is a Spanish comic’s take on Greek tragedy – a comic that has lived and continues to live just to make his audiences constantly laugh. No idea what the result will be, but for now… total happiness. Please enjoy.