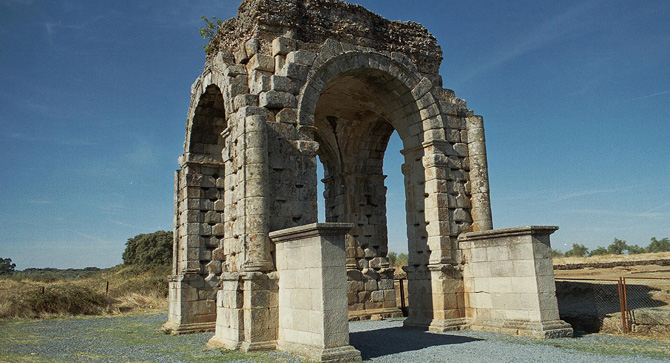 The Festival of Mérida in Cáparra

The Mérida International Classical Theatre Festival opened its fourth extension in 2017 in the Roman city of Cáparra, the first venue for this event in the province of Cáceres. This extension was added to those already located in Medellín, Regina and Madrid.

Just a few kilometres from the town of Plasencia in the municipality of Oliva lies the captivating Cáparra site. It’s a city which, under the rule of Rome, would become an important hub of communications on the north-south axis between Augusta Emerita (Mérida) and Asturica Augusta (Astorga) forming the Vía de la Plata. This strategic location assured a preferential place among the Roman municipalities of Lusitania, boosting its development and gradual monumentalisation still proven by all the archaeological remains.

Fully walled, Cáparra had three entrance gates situated to the southeast, east and west respectively. Two were main roads which created the backbone for the city: the cardo and decumanus. In the centre of the site is the Arch of Cáparra, the city’s undisputed symbol, next to which the stage will be located where the different scheduled theatrical productions listed below will be performed.

Aeschylus – The Birth and Death of Tragedy

Many years ago, I read the definition of Classical Art offered by a great Hellenist scholar whose name I no longer recall: “Classical work (he said) is when there’s nothing remaining of the effort involved in the creative process”. So, I thought, only a sunset, an eagle’s majestic flight in a limitless sky or the dancing of the stars in the universe can be classical. In short, something that’s always inaccessible to mortal artists.

This show is a Spanish comic’s take on Greek tragedy – a comic that has lived and continues to live just to make his audiences constantly laugh. No idea what the result will be, but for now… total happiness. Please enjoy.

La loca, loca historia de Ben-Hur is full of ingenuous visual gags, sarcastic and absurd dialogues and an interesting reflection of the truth, love and the gender battle. Four actors and two actresses in a state of grace bring a number of characters to life to once again tell what nobody dared tell about Ben-Hur and, this time, uninhibited. Because, in this story, things aren’t what they seem. Better said, in this story, things are what they seem…

Rome names Viriathus amicus populi romani as a reward for the mercy the Lusitanian leader demonstrated upon pardoning General Servilianus and his men from death. A period of peace begins for Viriathus and his people. But Caepio, the new consul, is not willing to consent to a barbarian bursting with pride at having forced Rome to sign a treaty. With the Senate’s connivance, he breaks this peace treaty. Viriathus becomes a symbol for Rome’s enemy tribes and Caepio tries to demonstrate that there is no symbol strong enough Rome can’t break, even if by treason…