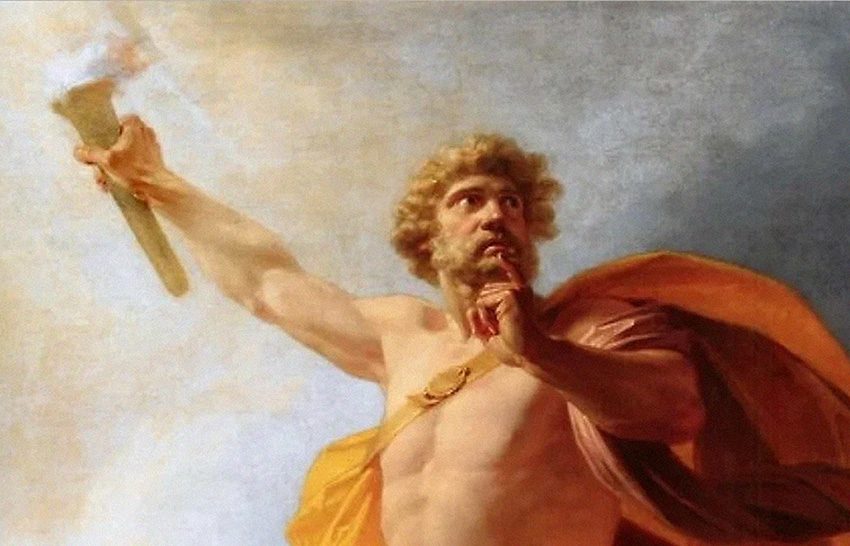 The play is a journey through memory. That of a man tormented by what he did by sacrificing his life upon giving fire to man and would later wonder for centuries: was it worth it?

The old man begins today, even a future today, from the moment where everything has already happened: wars, slavery, crises, injustices, ideological and religious failures, etc.

He desperately searches for what’s positive about the development of humanity. Co-existing with such horror and rot are Galileo, Bach, Shakespeare, Fleming, Curie, Picasso … and so many others of the same humanity whose stela is falling apart (“burning” according to the poet).

The conflict in the play is seemingly whether the young Prometheus will confess his secret: the end of Zeus. However, the real core of this piece is this old man’s inquiry into memory, trying to rekindle the reasons that moved him to act. Reasons that have been diluted over the years, becoming blurry and powerless. He tries to find and recover the passion of that young hero he once was. Reviving his dreams, the spirit that sustained and drove him to answer the question… was it worth it? He still wonders without response what is leading him to scepticism, apathy, a destructive cynicism into which he does not wish to fall.

Having the ability to view all of history from the now provides great clarity, a sense of humour and, as Steiner once said, the death of God for contemporary society led to the death of tragedy as such. That’s why he brings it back to life. Yet, on the other hand, the myth of Prometheus is based on an epic legend; however, the lyrical nature of Luis García Montero’s text leads the focus to the punishment (Chorus and other characters) with that tragic Greek character where Compassion and Freedom, for example, are eternal concepts – travel companions for the old man – not psychological characters. Working from the organic truth of emotions, sensations and beliefs, there’s an attempt to reach that “style” – simply to give it a name – where the text has an extreme presence.

Prometheus is a young man who dreamed up a history. 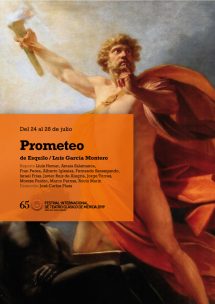