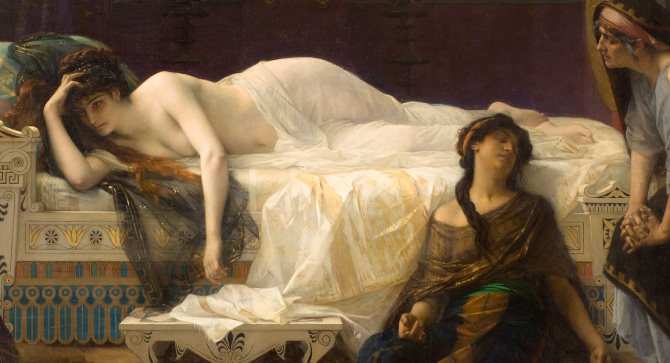 Phaedra, the queen of Volcano Island, is sick: she doesn’t eat, speak or sleep. The doctors are unable to find the reason for her illness and the whole country is concerned about her state of health. Some say that she has gone mad. Others, that the long absences of her husband, the king of the island, have completely devastated and ravaged her heart, but no one knows the truth, and they are all wrong. What is really responsible for her illness is no other than a passion that has tormented her for some time now and that she can no longer suppress; an immoral and unchaste eroticism, a violent and indomitable desire, a captive and indecent love.

Love, in many cases, is synonymous with joy and happiness, but, in others, it can also mean agony and great condemnation (especially when you fall in love with the wrong person). But how do we act when reason and desire come into conflict? Should we follow our head or our heart? Which ought to prevail? Thinking or feeling?

Traditionally, this is the internal conflict Phaedra has always had to deal with, a character who, caught up in the nets of tragedy, struggles and cannot decide. And this is what has brought her to her end, turning her into a rather inactive character, someone who, unable to choose, decides to embrace death as the best option.

What we wanted with this Phaedra is to awaken the character from that lethargy in which she has always been immersed to create a more combative and less fearful woman; someone who, fleeing from tragedy, will immerse herself in it and fight face-to-face; a guilt-free woman, capable of fighting for what she wants, and who, above all, dares to love.

That’s why the set chosen is an emotional place, as large as a volcano in the middle of an island surrounded by an ancient sea. A space that is a fissure in our protagonist’s chest, out of which her heart has sprung. A mise-en-scène where visual arts and music will transmit this violent history. A contemporary Phaedra that will openly and fearlessly speak of the freedom to love. Understand the reasons of one’s heart to learn to respect each other and, in this way, love each other better. Turn the great Roman theatre of Mérida into Phaedra’s chest and take refuge in it. The volcano is about to erupt. 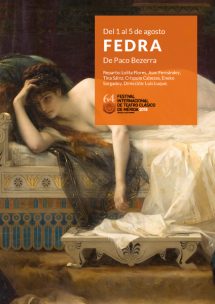