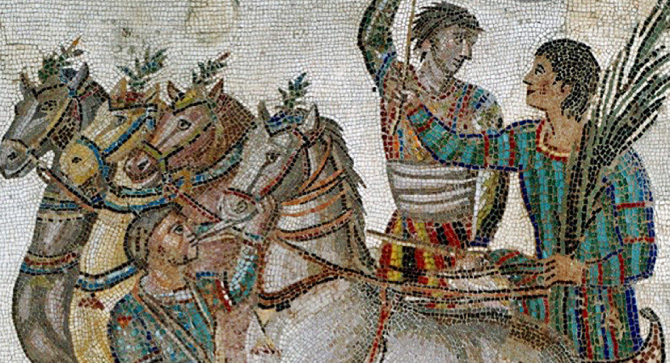 Ben-Hur is the theatrical adaptation of Lewis Wallace’s novel.

In a Roman theatre, a 1st-century company announces it is going to perform “The Real and Untold Story of Ben-Hur”.

Faithful to the content of the novel, the play takes us through all the common places of the collective imagination: starting with the Three Wise Men following a star that will guide them to the manger in Bethlehem, the tile that falls injuring the Roman prefect, as a result of which Ben-Hur will be taken on a fabulous adventure. The appearance of Christ, who paralyzes even the Roman legionaries with his gaze, the memorable naval battle, the chariot race… and, above all, the bitter rivalry between Judah Ben-Hur and his childhood friend Messala. A bitterness that will lead them to compete to death.

Because in this story things aren’t what they seem to be.

Or maybe we should say, in this story things are what they seem to be…

Conceived and directed by Yllana, and written by Nancho Novo, Ben-Hur takes a fresh and original look at the mythical character from a humorous perspective. With a breakneck pace and visual wit that they have defined as: TEATROMASCOPE, a proposal that offers constant interplay between theatrical and cinematographic language, presenting this epic story to today’s audience without losing any of its grandeur. A real 3-D performance, but without the need to wear glasses.

The work is full of witty gags, scathing and absurd dialogues and a curious reflection on truth, love, and the gender fight. Four actors and two actresses wittily bring to life a multitude of characters to show us once again, this time without reservation, what nobody ever dared to tell us about Ben Hur… “CHRISTMAS WILL NEVER BE THE SAME AGAIN”.