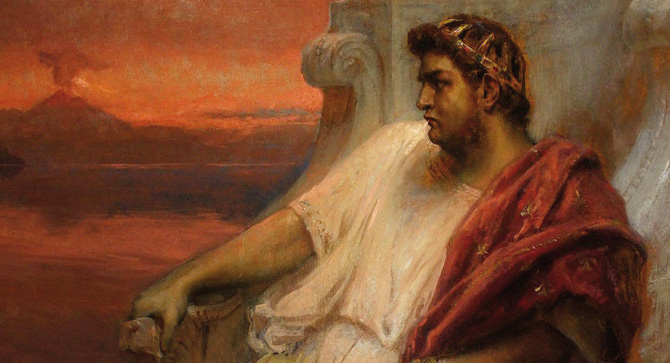 Nero went down in history as the emperor who caused the fire in Rome in order to rebuild the city in accordance with a new modern and artistic urban project. Current historical studies actually seem to indicate that Nero did not cause the Great Fire of Rome, but, once the city had burned down, he did take advantage of the chance to rebuild it again to his liking. In fact, we can consider Nero as an emperor who was an artist, a lover of culture and all the arts. However, this does not mean he wasn’t also a cruel tyrant and despot, as was usual in his time, capable of murdering his mother Agrippina, his half-brother Britannicus, his first wife, Octavia and, in a way, his second wife Poppaea.

He later married a boy-slave whom he ordered to be castrated and dress as the deceased empress. He wanted to be remembered as an artist: he sang, played the lyre, composed verses, recited and performed plays. He also revived the Olympic Games in order to take part in them. In addition, he was responsible for the first major persecution of Christians, whom he blamed for the Great Fire of Rome.

The play coming to Mérida shows how, throughout history, nations always make the mistake of permitting the tyranny of bloodthirsty rulers, whether by action or omission on the part of those close to the tyrant.

Our Nerón is a historical drama, filled with power and passion, developed through a modern structure (several flash-backs and simultaneous scenes with various spaces ranging from the palace or the Roman theatre of Naples to the catacombs). The argument is based on Henryk Sienkiewicz’s famous novel Quo Vadis? as well as on texts by the novelist Petronius (his counsellor) and the historian Suetonius. The spectator will be reminded of the famous film starring Robert Taylor, Peter Ustinov and Deborah Kerr. A whole host of historical and fictional characters pass through the play, for example Petronius, Marcus Vinicius, Agrippina, Saint Paul, Lygia, Poppaea, Tigellinus or Sporus.

Power and art, politics and ambition, madness and power all blend together in Nerón. 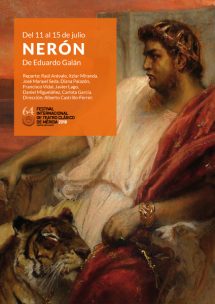