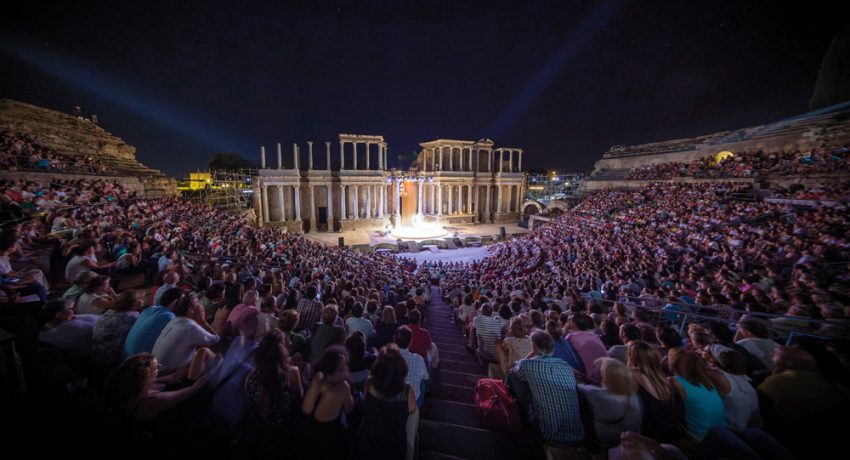 The Roman Theatre is, without any doubt, Mérida’s most representative monument. And, due to its size, it is also the most emblematic stage of the long history of its International Classical Theatre Festival, which was first held in 1933. Today, it is still a real luxury to be able to enjoy a theatrical performance on a summer’s evening on the same spot where they used to be held over two thousand years ago.

According to an inscription at the theatre, it was built between the years 15 and 16 B.C. promoted by the consul Marcus Vipsanius Agrippa.

After so many years of existence, and having been fully exposed to the elements, it is only natural that it has undergone several renovations, the most important of which took place at the end of the 1st/early 2nd century, apparently during the reign of Emperor Trajan, when the current façade of the stage front was erected, with three openings from where performers enter the stage. Later, between the years 330 and 340, under the government of Emperor Constantine, new decorative architectural elements were introduced, as well as a cement walkway.

The Roman Theatre had a seating capacity of 6,000. Spectators were distributed from top to bottom according to their social rank in three areas of stands or caveas, which were separated by corridors and barriers, and reached by stairs distributed radially. The vomitoria were accessed through a series of passageways.

It fell into certain decadence during the development of Christianity, which considered the theatre as something immoral. Therefore, the Roman theatre was abandoned and even covered with sand, in such a way that only the upper tier (summa cavea) was visible. It was later referred to as “The Seven Chairs” because, according to tradition, several Moorish kings had sat there to decide the city’s fate. Its excavation did not begin until 1910.

The Mérida Archaeological Site, of which the Roman Theatre is a part, is one of the largest and most extensive archaeological sites in Spain, being declared a World Heritage Site by UNESCO in 1993. The theatre is located in a peripheral location within the Roman city, next to the walls, and with a large part of its stands built into the Cerro de San Albín hillside.