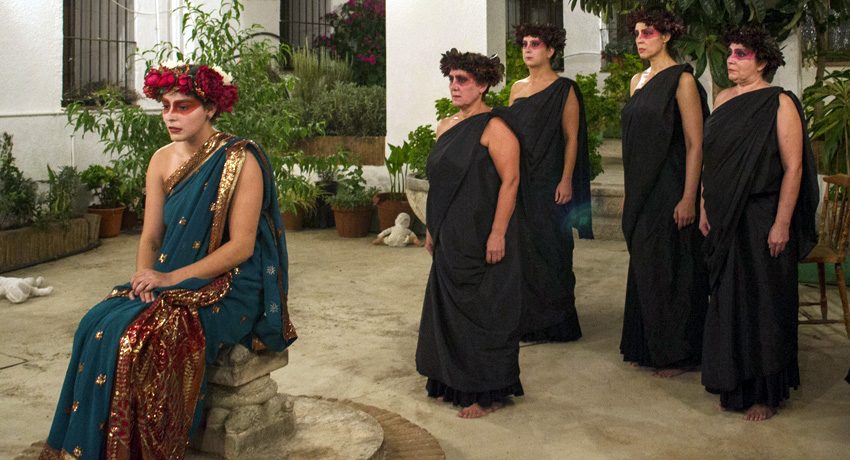 Greco-Latin theatre will be arriving in twenty towns throughout the region this summer with training workshops to be taught by some twenty local theatre companies sponsored by the 65th Mérida International Classical Theatre Festival.

This training activity, aimed at adults, young people and children as well as theatre and acting enthusiasts in general, was created six years ago in an effort to transmit the essence and beauty of classical texts to all corners of Extremadura with so participating residents may also get involved in the Festival of Mérida.

The topics of the workshops are focused on Greco-Latin theatre although specific aspects will be worked on in each location such as body language, choruses, gestures and movement in addition to more historical and theoretical details in some places.

Those interested in participating in these workshops must contact the town halls in each location or the theatre companies.

A singer’s preparation of a repertory involves in-depth aesthetic and formal analysis which improves their understanding of musicals. This course is offered due to the need to provide vocal students from the various schools in and outside Extremadura new horizons both on an amateur and professional level in collaboration with one of the most important Spanish and international figures. Student contact with active professionals provides extra motivation for tall those interested in the world of lyrical song. Besides the vocal classes, David García will be on hand to train students in theatre singing.

The Dance Dialogues project promoted by the Spanish Academy of Theatrical Arts is aimed at reflecting the dimension of the artistic and intellectual talent of dance professionals, boosting their value as artistic heritage of the theatrical arts in Spain. Dance Dialogues is an opportunity for dance professionals and the public to come together for a conversation focused on artistic creation methods, the research process and the keys to setting up dance scenes.

Since 2017, this activity has travelled to Madrid, Valencia, Burgos and Alicante and, in 2019, it is expected to continue during important theatre events throughout Spain such as the 65th Mérida International Classical Theatre Festival.

Dance Dialogues brings two choreographers of renowned prestige together for a conversation on the creative and investigative process behind their shows, guided by a moderator with experience in dance studies and dissemination in Spain. The purpose of Dance Dialogues is to bring the discipline closer to the target public, promoting a conversation that is open to the participation of those attending to respond to their questions and concerns.

Mondays, Wednesdays and Fridays in July 2019

An experience related to the power of the spoken word, its connection to the story of the world and its invisible – yet definitive- influence on people’s professional and private lives.

It is comprised of a masterclass, La Palabra Mágica (The Magic Word), which will open the programme on the first day, and a 4-week workshop (throughout the festival) for actors, directors, teachers, writers and others interested in the world of the spoken word.

In this workshop, we will work using my method known as The Articulation of the Word, which I have developed and systematised over more than 50 years of experience in theatre, cinema, television and music for people who must use the spoken word in acting as well as business. It has been acknowledged by a public university (Zaragoza) to train students at the Faculty of Economy and Business (with support from IberCaja) with a credit-earning programme just finishing in December 2018 for the second year in a row.

At these workshops, participants will work on essential aspects like learning to speak with direction, controlling their articulation and the sounds of words, finding a source of energy to emit, understanding and identifying tonal argumentation lines and, above all, finding oral credibility in accordance with a particular dramaturgical style and the conditions that affect each character, whomever it may be. The most important part will be becoming aware of all the meaning by figuring out what’s important and that will change the way they perceive and express words forever.

We’ll work in groups and individually on the following aspects:

The sound connection between texts and even styles will light up the map to all of the relationships, significantly expanding the mental scenario for an actor’s creativity.

After all, everyone who speaks in public is an actor.