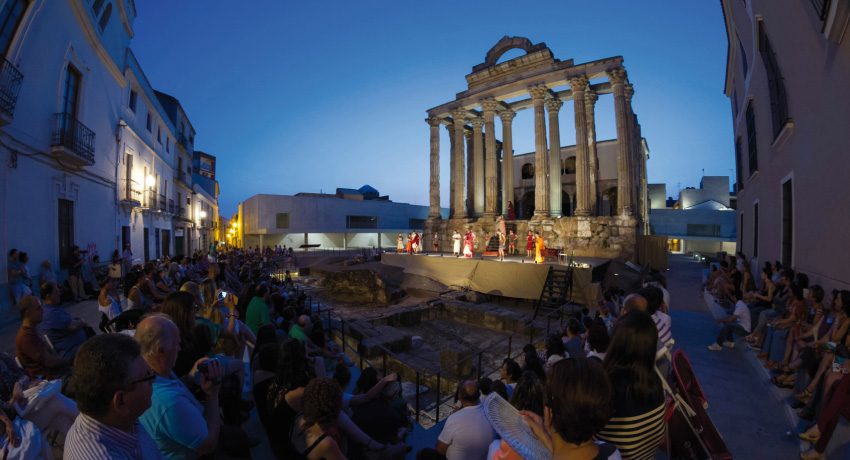 The Mérida International Classical Theatre Festival alternative off programme, Agusto en Mérida, features a set of events to disseminate classic culture through educational, recreational and artistic activities. Sites of archaeological importance in the city such as the Temple of Diana, the Forum Portico and the Calle Pontezuelas Thermal Baths are revitalised and once again turned into privileged settings for Greco-Latin classic culture during the months of July and August under the direction of TAPTC? Theatre by students from the TAPTC theatre school? and ESAD higher school for the dramatic arts as well as members of theatre groups from other towns and various local artists.

The scheduled activities are described below.

There are three types of activities:

January to March: the adaptation of original texts, dramaturgy or versioning work, the organization of human resources and materials.

April: a gathering for people interested in participating in the dramatization of philosophical dialogues
June, July and August: Workshops-setting up theatrical events.

Edipo y los Labdácidas: ¡Qué familia! (Oedipus and the Labdacuses: What a Family!)

In the parador courtyard

By Raquel Bazo, based on texts about Euripides, Sophocles and Aeschylus

In the temple of diana

Dramaturgy and direction by Javier Llanos, based on Amphitryon, Plautus and other references.
TAPTC Theatre School?

Heroism is an trait generally attributed to men, which links the ability to resolve an extreme situation to violence and physical risk.

In 2019, the film selection comprising the Cinema Aestas cycle will expand this concept to choose stories reflecting one or more women up against adversity who break away from the role habitually attributed to their gender to take hold of their own destinies and turn their actions into examples for all of society.

Mary and the Witch’s Flower

Animation. Fantasy. Children’s/Family. Mary is a young girl who lives with her Great-Aunt Charlotte in the countryside. One day, she follows a mysterious cat into the forest and discovers an old broomstick and a strange flower that blossoms only once every seven years and only in that forest. The flower and the broomstick take Mary above the clouds to Endor College, a school of magic run by headmistress Madam Mumblechook and the brilliant Doctor Dee. Mary will have to risk her life to try to set things right. (FILMAFFINITY)

Most likely hosted by Carolina Yuste.

Drama. Romantic. Young adult/adult. Carmen is an adolescent in the gypsy community who lives in the suburbs of Madrid. Just like any other gypsy girl, she’s destined to live the same life as the generations before her: marry and raise as many children as possible. But one day she meets Lola, a rather uncommon gypsy girl who dreams of going to university, draws bird graffiti and is different. Carmen quickly becomes fond of Lola. They try to keep on with their romance despite the problems and social discrimination they must face because of their families. (FILMAFFINITY)

The Battle of the Sexes

By Jonathan Dayton and Valerie Faris

Biography. Comedy. Young adult/adult. The Battle of the Sexes was the name of the 1973 tennis match between Billie Jean King and Bobby Riggs. Convinced he could beat any woman, former champion Bobby Riggs, at 55, challenged the young rising star Billie Jean King, 29, to a duel that would decide who was the “superior gender”.

At that historic period in time, the successful young athlete was a staunch defender of women’s rights and just before the event had refused to participate in a tournament where the winning male received a monetary prize that was eight times higher than the one given to the female winner. The “Battle of the Sexes” became one of the most-watched sports events on television and led to much debate on gender equality and the feminist movement. (SENSACINE).

Most likely hosted by the director.

Documentary. Adult. In this story about emancipation and freedom right during the Syrian War, Commander Arian guides a battalion of women towards Ayn al-Arab on a mission to free the people living under oppression from ISIS. Arian, who had witnessed the savage treatment of victims of sexual violence at a very young age, does everything possible so her comrades can discover the real meaning behind the fight: freedom for the next generation of women. After living for months with the commander and her troops and filming unprecedented intimacy including raw scenes showing Arian’s slow recovery, Sotorra creates a fascinating portrait of a woman on a mission. (FILMAFFINITY).

Actress Lola Herrera performs Miguel Delibes’s monologue “Cinco horas with Mario” (Five Hours with Mario) every night. As time passes, she goes through a great change in personality to the point of confusing her own life with that of Carmen Sotillo, the character she plays. Locked in her dressing room, Lola Herrera and Daniel Dicenta, who separated after several years of marriage, talk and argue while going over the life they had once shared. (FILMAFFINITY).

Drama. Oum Yazan, a mother of three who is trapped in her home in a Middle Eastern city, has turned her apartment into a safe haven for family and neighbours in an attempt to protect them from the war. When the bombs threaten to destroy the building, the snipers turn the courtyards into death zones and thieves break in wanting horrible rewards. Maintaining a balanced routine within those walls becomes a question of life or death. (FILMAFFINITY)

Science fiction. Terror. Adult. Heading back to Earth, the towing vehicle Nostromo interrupts the trip and awakens the seven crew members. The central computer, MOTHER, had detected the mysterious transmission of an unknown form of life on an apparently uninhabited nearby planet. The ship then heads to the strange planet to investigate the source of the communication. (FILMAFFINITY) .